DONATE £50, GET YOUR NAME ON DANIEL'S PORSCHE & WIN A TRIP TO A RACE MEETING!

For a £50 donation, put YOUR NAME on Daniel Harper's Porsche & be in with a chance to win a trip to a 2019 race meeting with Daniel and his team!

The Idea
Background
Why Donate?
The Idea

Be Part of the Team!

County Down motorsport ace, Daniel Harper, is gearing up to contest his second season in the Porsche Carrera Cup GB and YOU can be a part of his team...

Harper, who celebrated his 18th birthday at the start of December, is giving his fans the opportunity to get their name on the Porsche that he'll be driving during his 2019 Porsche Carrera Cup campaign as well as the chance to win a prize trip to join him and the team at a race meeting!

Having spent a few years racing karts and Ginetta Juniors, Daniel was chosen by a panel of judges to become the prestigious Porsche GB Junior driver for 2018/2019 after a demanding and intense selection process.

He competed in his maiden season with Porsche in 2018 and some incredible driving saw him claim two race wins as well as the highest number of fastest laps and pole positions.

Renowned for his daring overtaking manoeuvres, he finished fifth overall in the championship. Now that he has some vital experience under his belt, his sights are firmly set on an even stronger 2019.

Support Daniel by making a donation

By donating £50, you can put your name on the roof of Daniel's Porsche 911 GT3 Cup and you'll be in with a chance to win tickets for two, including travel and passes, to join Daniel and his team at a race during the 2019 season.

You'll also be supporting Daniel Harper's 2019 racing campaign. The money will strengthen Daniel's position in the 2019 Porsche Carrera Cup GB as he mounts a title challenge.

Get Your Name on Daniel Harper's Porsche 911 GT3 Cup!

...and be a part of the success story!

Your Name on the Porsche's Roof!

Like all budding motorsport stars, Daniel needs to raise funds to help support his 2019 racing campaign and ensure that he's in the strongest possible position to succeed on the track.

To help, he's giving fans and supporters an opportunity to put their names on his Porsche 911 GT3 Cup race car!

For £50, you'll be supporting one of the country's brightest young motorsport prospects and your name will be carried on the roof of his high-powered Porsche for the entire 2019 Porsche Carrera Cup GB season!

You'll also be kept up-to-date with Daniel's progress by email and all supporters who donate £50 will be entered into a draw to win prize tickets for two, including travel and passes, to join Daniel and the team at a race during the season.

...and your name will be displayed on the Porsche's roof! 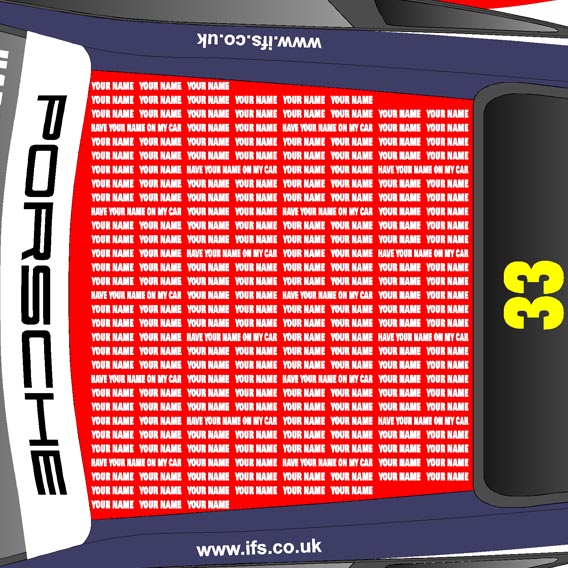 Get Your Name on the Car & Enter the Prize Draw!

To put your name on the roof of Daniel's Porsche 911 GT3 Cup race car and enter the prize draw, simply donate £50 by clicking the Paypal link below.

Enter the name you would like to be displayed on the car in box one and if you want to be included in the free prize draw, answer the question in box two.

Thank you for your support and good luck!

THANKS FOR YOUR SUPPORT!

Daniel Harper is a rising star in the world of motorsport. The 18-year-old from Anahilt, near Hillsborough in Northern Ireland, is competing in the 2019 Porsche Carrera Cup GB series.

Be Part of the Team
The Deal